Since 2013 many hydroponic cucumber (Cucumis sativus) and tomato (Solanum lycopersicum) crops in the Russian Federation have been affected by a root disorder known as root mat. The symptom is extensive root proliferation within the rockwool propagation cube and across the rockwool slab surface. This disease is common in the UK, France, Japan, Greece, Switserland, and New Zealand, causing significant loss in marketable yield. The causal agent of this disease was shown to be wild-type Agrobacterium biovar 1 strains harboring a Ri-plasmid. In 2014–2015 it has spread across many regions of Russia and became one of the most serious problem of vegetable cultivation in glasshouse. Agrobacterium biovar 1 strains have high resistance to many antibacterial chemicals and antibiotics.

“Hairy root” or “root mat” disease is characterized by extensive root proliferation (Fig.) and occurs on different economically important crops dicotyledonous plants. Since the early 1990s, the disease has affected hydroponically grown cucumber plants and tomato crops in the United Kingdom [1]. Hairy root disease is generally associated with pathogenic Rhizobium rhizogenes strains (formerly Agrobacterium rhizogenes) [2], the cause of the disease on hydroponically grown plants is Agrobacterium radiobacter (biovar 1) strains harbouring a root-inducing Ri-plasmid [1, 3]. Symptoms are induced after transfer of a segment of the Ri-plasmid into the plant genome [2, 4], isolates without an Ri-plasmid are avirulent. These plasmids can be transferred to nonpathogenic related rhizobia/agrobacteria [5, 6], and produce novel pathogenic populations with better adaptation to particular environmental conditions.

In the 1970s a new disease of cucumber (Cucumis sativus) affected many soil glasshouse crops in the UK. Roots grew upwards on the soil surface in a dense mat, and occasional gross thickening of roots was found when plants were removed. In 1980-s the problem had not been reported, though it reappeared in 1993 in hydroponic crops grown on a rockwool medium [1]. During the period 1997–2003 it was widespread in main production areas in England, causing economic crop losses in some nurseries. Root mat has become an important root disease of hydroponic cucumber crops in the UK, and later – in other countries. This disease has been found in France, Belgium, Japan, Greece, Switserland, and New Zealand [1, 3, 7, anonymous industry reports]. 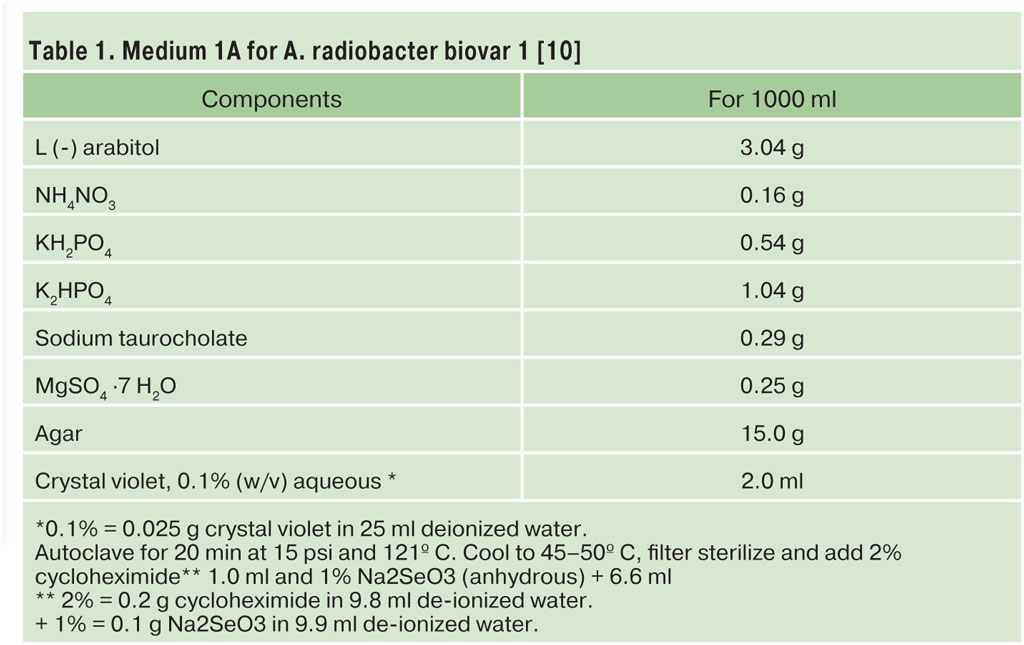 MLSA analyses based on the sequences of genes atpD, glnA, and recA revealed that the isolates are in the A. radiobacter clade [3, 7, 8]. PCR analyses clarified that the pathogen harbored a cucumopine Ri plasmid. Phylogenetic analyses revealed the existence of chromosomal polymorphisms among the present isolates, which proved to belong to different genomovars of A. radiobacter species complex. The cucumopine Ri plasmids harbored by all the studied root mat pathogens were highly homogeneous, which suggests that plasmids derived from the same origin might have been transferred to the indigenous bacteria [3, 7].

Other Alphaproteobacteria have been isolated from the affected crops, which also carried pRi plasmid. The strains of genera Rhizobium, Sinorhizobium, and Ochrobactrum have all been shown to induce root mat symptoms in pathogenicity test [5, 6].

In 2013, hairy root symptoms were observed on commercially cultivated cucumber plants (Cucumis sativus) grown in large hydroponic installations in Novgorod region, Russian Federation. For the first time, the rhizogenic strains of A. radiobacter biovar 1 were isolated from affected roots, rockwool, and irrigation water pumped from local river in Novgorod [9]. The same bacteria were isolated from cucumber vines, fruits, and seeds. During the year 2014, the A. radiobacter biovar 1 isolates from plants with similar symptoms were obtained in glasshouses of six regions of Russian Federation, including Krasnodar, Rostov, Chelyabinsk, Ulyanovsk, Cheboksary, Volgograd, and Novosibirsk [8, 9].

Bacterial strains can be isolated using semiselective media for the growth of Agrobacterium spp., using the following protocol:

Soil/substrate, water sample or root tissue was plated onto 1A medium [10] with 80 ppm potassium tellurite, a semi-selective medium for Agrobacterium biovars 1 and 2 [4]. Plates were incubated for 72 hours at 28 °C. Single bacterial isolates were selected and re-streaked onto tryptic soy broth agar (TSBA) to obtain single colony isolates. Purified colonies were tested for 3-ketolactose activity and all positive isolates were designated as A. radiobacter biovar 1.

To extract total DNA from bacteria, individual isolates are grown in 2–3 ml of tryptic soy broth (TSB) at 28 °C for 24 hours with shaking. One to 1.5 ml of bacterial culture are aliquoted into 1.5 ml centrifuge tubes and cells were collected by centrifugation at 14,000 RPM for 8–10 minutes. The supernatant was decanted and bacterial cell pellets were stored at –20 °C until DNA extraction was performed. DNA was extracted from frozen bacterial pellets using the DNA extraction kits as per the manufacturer’s instructions. Genomic DNA extracted from A. tumefaciens biovar 1 strains was diluted with water to a concentration of 50 to 150 ng/µl prior to using as template for polymerase chain reaction (PCR) -based experiments.

The rol-gene real-time PCR assay [4] has indicated that the majority of RMA pRi (80%) possess identical T-DNA sequence from cucumopine pRi plasmid. However, some strains were isolated from recent outbreaks which did not possess this sequence but were shown to harbour pRi by conventional PCR assays [7].

In Russia, the bacterium was isolated from irrigation water, cucumber fruits and commercial seeds. It is not a new observation of systemic spreading of A. radiobacter in infected plants and seed contamination – it has been reported before for oilseed rape and other crops.

The identity of all obtained isolates was confirmed by biochemical profiles [2, 3, 4, 7], RT-PCR as described before [4], and sequence typing of the housekeeping genes atpD, glnA, and recA [8] for strains representative of distinct local populations. BLAST analysis revealed from 98% to 100% homology of the studied genes between the newly isolated strains and root mat associated A. radiobacter (NCPPB 2659) strain [8, 9].

The pathogen has extremely high rate of spreading, survival in infected soil, water and substrate, and easy establish new local populations in infected glasshouses. Within 4 months after ther first observed symptoms on some 0.5% of plants, the pathogen was recovered from 95% of plant, soil, and substrate samples collected across the glasshouse with 12000 plants (Khodykina et al., unpublished).

Different lineages of rhizogenic Agrobacterium strains are able to form biofilms, which may pose a high risk in hydroponic recirculating systems used in the cultivation of cucurbits and tomato. Biofilms protect microbes from biocides. Various strains of A. radiobacter were able to tolerate hydrogen peroxide, even at concentrations of 600 ppm (in practice, in general concentrations of maximum 100 ppm are used) [7]. Additionally, strains were found that possess catalase activity, enabling them to survive hydrogen peroxide exposure. We have described before a high resistance of A. radiobacter bv 1 strains to newarly all tested antibiotics of different activity mechanisms [11].

Phytosanitary measures must be strictly followed to reduce initial level of contamination. A number of biocontrol agents has been tested [9, 11], and they can improve plant tolerance to the disease, but unable to clearn the glasshouse and prevent infection on new plants in installation once infected by this new harmful pathogen.